I had spent the morning watching the equally mysterious Tonopah Test Range Airport from Brainwash Butte, about 50 miles northwest of Groom Lake.  I got bored by lunchtime and headed to Groom. I was passing Queen City Summit heading south when I heard jet noise.  I exited my car to see a single MiG-29 transiting towards Groom Lake at around 15000 feet.  I just had time to catch 3 photos with my 210mm lens.  It appeared to be a hump-backed MiG-29 Fulcrum C, a 9.13 version similar to those 21 airframes that the US had bought from Moldova in 1997.


The next morning I had planned to do the famous Tikaboo Peak climb, and felt particularly motivated after my encounter with the MiG-29.


I got up at 4.30 am to drive to the start of the hike, and annoyingly I got a blow out about 20 miles off road, a mile short of the start of the hiking trail.  On reflection doing 40mph on a rough gravel road was not wise! Not wanting to be beaten, I parked the car and pressed on with the hike, with the intention of changing the tire later.

After the 90 minute climb, some of which is pretty strenuous, I got my first view of the Groom Lake base. What a moment of elation!  The base is illumated by the morning sun, so arriving on Tikaboo Peak by 7 am maximised my viewing time.  The base is roughly 26 miles away across the desert, so you need good optics to see anything.  It seemed to be a quiet morning, just a couple of Janets and a F-16 landed.


As the sun came round into the south my view was deteriorating, so I called it a day at 11am and descended the mountain to fix my tire.  I finally limped back onto the tarmac at the Pahranagat Lakes at lunchtime, after a very nervous 10 - 15 mph drive out of the desert.  The spare tire was only a thin temporary and flimsy looking thing, and I was relying on it to get me over 20 miles of dirt road!

Having fitted a replacement tire in Alamo, I returned to the Extraterrestrial Highway 90 minutes before dusk and parked up a couple of miles south east of the Mailbox.

I soon became aware of 2 aircraft dogfighting to the east of the Powerlines Overlook, probably somewhere close to Hiko or Crystal Springs.  It quickly became obvious that one of the planes was a MiG-29, thanks to the dirty engine smoke it left behind, a trademark of 1980s Russian engines.  I watched for 20 minutes as the MiG and an F-16 performed a number of head on intercepts in the distance.

When they had finished playing I was lucky enough to have them both transit almost directly overhead me back to the base, at around 20000 feet.  I took a series of photographs, with the planes backlit by the setting sun as they headed West back towards Groom Lake Base.  The MiG flew straight and level, while the F-16 manoeuvred around it, checking it out from all angles. 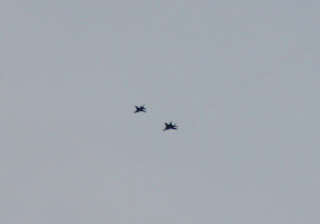 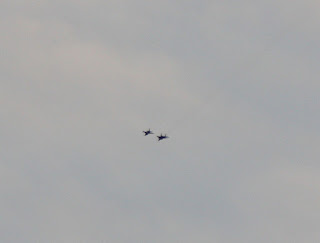 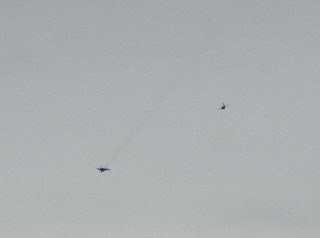 To give you an idea of how difficult it can be to spot and identify these planes, here is a regular 50mm shot of the F-16 / MiG-29 formation as it passed over:


So that was that! Mission accomplished.  MiG's photographed, Tikaboo climbed, Aliens evaded. Now back to Vegas for some fun!

Posted by Stealth Spotter at 11:12